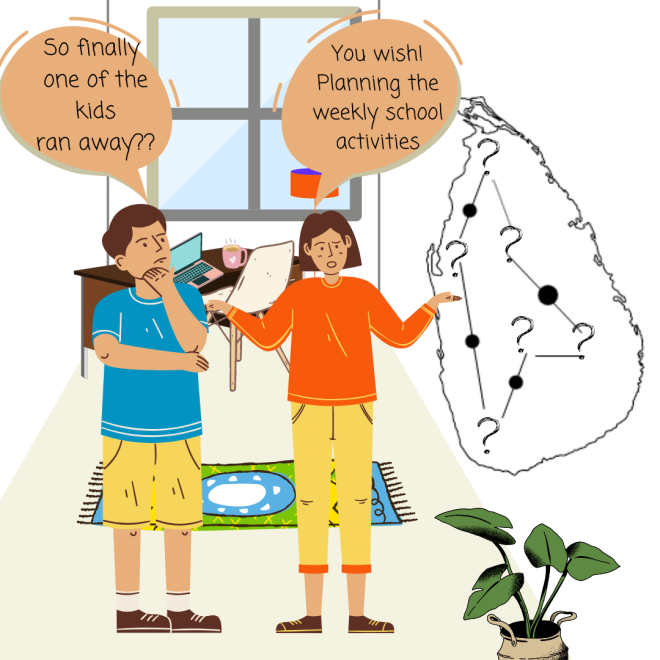 Myth Busting, From One Parent to Another.

I started playing tennis at 15 and stopped when I was 18. Three whole years of fun, practices, school tournaments, and Mrs. Jilla’s chocolate rewards. I remember walking to SLTA (Sri Lanka Tennis Assoc.) courts after school at least 3 days a week. From Bishop’s College to SLTA, it was about a one-mile walk. School was over at 1.30pm and off I’d go in the 30°c heat carrying a tennis bag and school backpack that weighed half my body weight – and I was a scraggy 90lbs. What really surprised me was seeing the number of little kids at SLTA. Most looked like pre-schoolers huffing and puffing away around the court. And their parents. The mothers were seated in a row watching intently. My mother visited my school only twice. And I cannot remember her ever having met my tennis coach. She had different ideas about motherhood and I had different ideas about playing tennis. But I wondered about those kids. 30 years later, where might they be now?

So let’s start with the myth of early sport specialization (ESS). Parents depend on coaches for the best information and are told that ESS is an essential requirement for elite performance. Media too loves to propagate this myth by highlighting early sports specializers such as tennis stars, Venus & Serena Williams and Tiger Woods, although research on athletes in team sports does not support this view. The three myths of ESS are busted in this paper by Atkinson and Goodway, 2021. The myths are:

The athlete will become more prepared for adulthood

The athlete will receive better coaches

There are other misconceptions about parenting that often appear in the form of traditional or modern well-known sayings.

In our society, mothers are often criticized for all the problems that occur with children. Society dictates that good children are the product of good parenting skills, not taking into account external influences on the child that are impossible to control.

One well-known myth is “A woman’s place is in the home.” Stereotypes related to the role of the mother can be an intolerable emotional burden. Such pressures have the potential to jeopardize a psychologically healthy relationship between mother and child. Society says working mothers are not a good fit for the well-being of their children. But the research says maternal employment is largely inconsequential to a child’s well-being. Here are some important findings:

Do you remember our grandmothers telling us that she treated all her children the same? This is another myth that has to be busted.

How children are raised is shaped by their parent’s social status, cultural norms, and level of education. It has been found that parents with a lower educational status are more likely to resort to an authoritarian style of parenting, while parents with a higher educational status are more likely to adopt a democratic parenting style, showing an appreciation for the uniqueness of each child. And this democracy is demonstrated by acknowledging diversity and understanding that the myth that “all children should be treated equally” is not helpful for the development of each individual. Therefore, it’s crucial to understand that no child should ever be compared to anyone.

We cannot overlook another very contentious myth in our Sri Lankan society today – that kids need corporal punishment. Our grandparents got it, our parents got it and we got it, so why not our kids? We survived, right? We turned out alright (so we think!) And we have all heard of the aphorism, “spare the rod and spoil the child”, so there is some truth in this, no?? No.

Proponents believe children’s personal development will suffer without physical punishment for wrongdoing. Authoritarian parenting involves strict rules and little affection. This parenting style aims to instill self-control and obedience by making demands without explanation because “beatings are remembered”. Parents pass on numerous beliefs and attitudes from their personal experiences to their own children. The non-effectiveness of corporal punishment for problem behavior is well studied. In fact, this study found that parents’ corporal punishment was associated with children’s internalizing and externalizing problem behaviors.

The Goni Billa scare is another well-practiced parenting AND grand-parenting skill in Sri Lanka. The monster is coming in the night, or anytime the child misbehaves. Many parents and grandparents see this as a joke that instills a ‘little’ fear in children, in order to control them more easily. Scaring children with the Boogeyman or Goni Billa is ineffective.  Fear uses the lower levels of the brain, so children do not learn to think when parents use fear. Fear-based discipline can increase children’s fears. Scared often, their brains learn to be scared faster. Discipline your kids some other way.

The degree/diploma myth – ‘You are nothing without a degree’ – is this heard in many households? I think it is. Especially where teenagers live. Studies have shown two categories of parents who insist that the diploma is the be-all and end-all of a successful life. One group consists of those who grew up modestly and had no opportunity or finances to achieve their aspirations in life. The other group is made up of highly educated parents who cannot imagine their child not following in their footsteps. This one I leave it up to you to decide whether it is a fact or a myth. A I Rabin explores the effects of fulfilling educational expectations and narcissistic motivation in parents, here. Think about the self-worth of a child if they are unable to achieve your expectation. Not only their self-worth but also their mental health. The feeling of being a failure. However, studies also show that the quality of parental involvement and expectations are well associated with children’s achievements and that early parenting factors are important for academic achievement.

Why do parents behave in this manner? Research has shown that parents copy the behavior that their own parents adopted during childhood, and also behave according to ‘correct parenting’ information that they get through the community and media. After all society can be quite harsh and judgmental and parents are motivated by the need for acceptance. That is just one explanation among many.